I fought my first ever real wargame last night with my chum Ken. 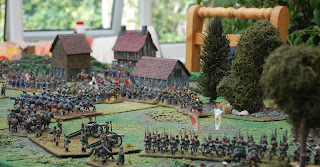 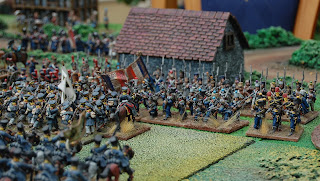 However, they were about to be creamed (technical term there) as the Russian juggernaut was about to splatter what was left of the French left flank.

Good fun, great company, and Ken was very patient explaining the rules to me.

We used Blackpowder and overall it was good.  I total newcomer picked them up (sort of) quite quickly.

My only real concern was why should an attack column get as many shots as a line? 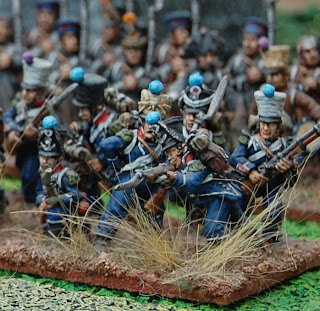 Seems a bit odd to me. There were other things that just didnt feel right to me but may be thats my ignorance. 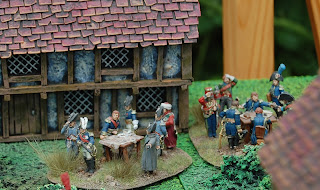 Napoleon popped along to have his picture taken. 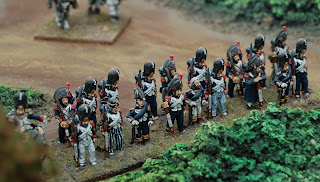 The Old Guard were all that stood between a Russian / Prussian victory and salvation at the end. 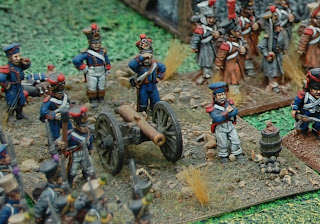 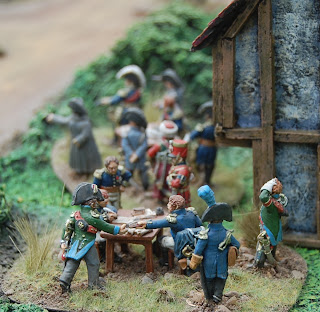 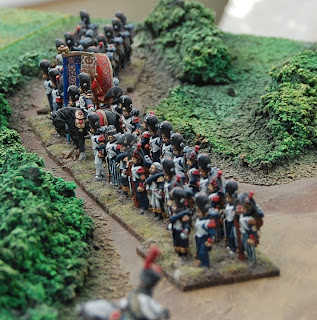 They looked relaxed dont they? 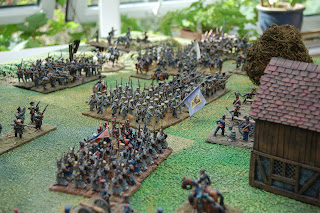 Through sheer ineptness I managed to lose all the French cavalry and horse artillery without really achieving much.  Or, I held up the Prussian long enough for the reinforcements to arrive! 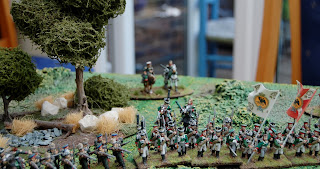 The beginning of the Russian onslaught.
Posted by RTB at 14:12 10 comments:

I wonder if any of you kind ladies or gents can help me out of a pickle?  No!  Not branston (although with cheddar there is nothing finer) but the Foundry have stitched me up!

A while back I bought some of their Napoleonic Russian regiments; I bought some fatigue cap in great coat, and some in fatigue cap. Guess what? They are exactly the bloomin same!  This means I didn't buy any in fatigue caps and uniform coat during the last sale and I urgently need some!

If you have some spare Russian infantry march attack in uniform coats and fatigue cap I would be most interested to hear from you.  I can either swap you for great coated figures, or full dress with shako.

I'd also be interested in getting hold of some Russian Grenadiers (not guard) in post 1812 kiwer, and French grenadiers pre-1812 in campaign uniform and bearskin.

If you can help drop me an email at: roger.murrow@mmc2100.co.uk 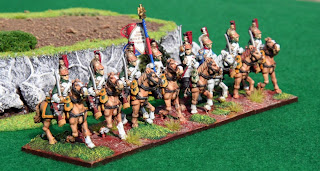 These are now in the collection of the said Arch Duke 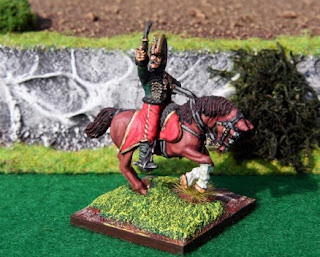 Front Rank Lassalle sold to ADC and based by him 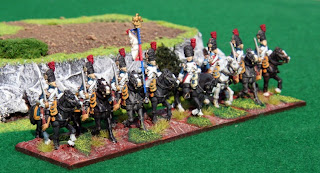 Foundry Grenadier a cheval again in Canada as part of the collection of Arch Duke Charles.
Posted by RTB at 14:21 3 comments: