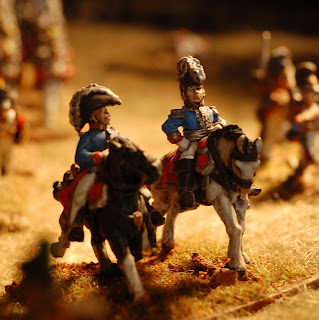 A Bavarian general and adc 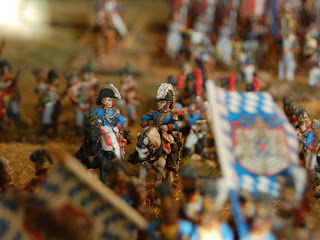 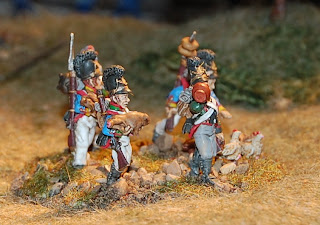 Forager group (plus cjhickens) a real joy to paint (not the chickens) and I am really happy with them. 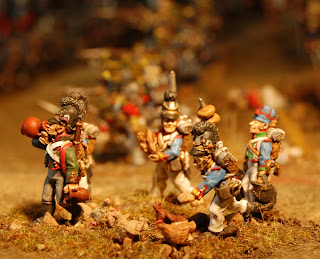 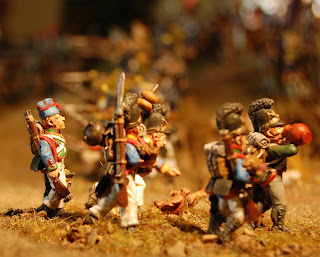 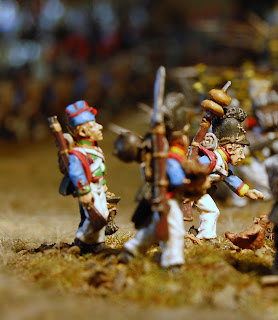 As someone who has been experimenting with baking his own bread please note the exploding bread rolls. 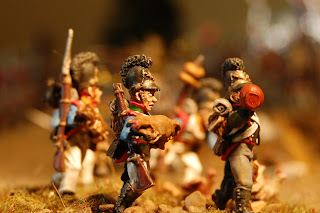 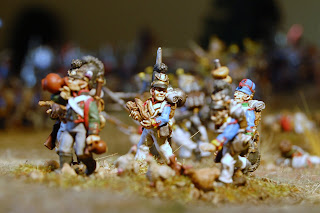 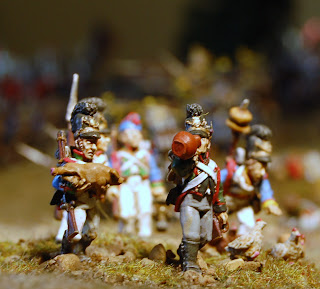 Hope you like them as much as I do!
I am a rubbish photograpgher, and the figures look better in the flesh, but I am very happy. 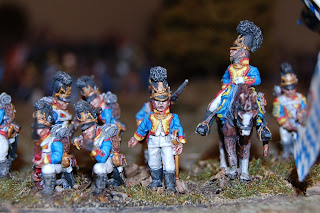 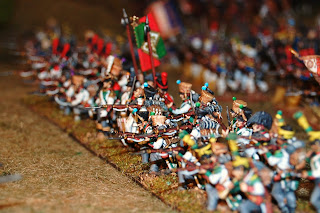 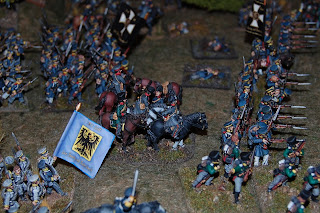 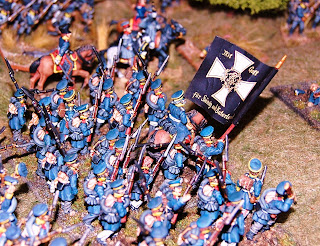 Quite a productive year for me, especially considering as this year I took the plunge and set up on my own. The painting has served an additional purpose as its given me a break from what other wise may have turned me into a workaholic.
The general theme was initially trying to finish my Prussians (still not completed but not far to go), but also adding some new units to my French 1813/14 army, then some commision work, and some plastic experimentation. I have two commisions for 2010 that I am looking forward to but still undecided as to what to paint for me. The choices are:
1. complete the Prussians
2. Russians from scratch - I have all the figures
3. Anglo-German force for northern Germany / Waterloo. I have most of the foot, some artillery, but need cavalry. I also have the excellent Foundry Wellington command set.........
Not made my mind up yet.
Anyway, the totals are:
For me:
20 Old Guard Grenadiers - Foundry
20 Old Guard Chasseurs - Perry
15 French casualties - Foundry
30 assorted Prussian skirmishers and Jaeger - Calpe
72 Prussian Landwehr - Calpe
72 Italians - Victrix
5 Prussian Brigade command - Calpe
4 Prussian mounted officers - Calpe
72 Bavarian line - Foundry
18 Bavarian light - Foundry
4 Bavarian command - Foundry
5 Bavarian foragers - Foundry
3 Discworld characters
Commission work:
88 Bavarian line and light
16 Bavarian cavalry
3 Bavarian command
Grand total:
412 foot
32 mounted
.................and four chickens and one pig......................two witches and a cynical policeman.
Hope you have a great festive season and will post pic's of the new Bavarians when my clients stop giving me work to do and I can have a holiday!
Cyfachion Y Timor

Well, I've had a good time watching the rugby, and yet again I am gutted most of the time. Here's my state of play of the northern hemisphere sides.

How can you go from one minute give New Zealand a hell of a battle, to nearly winning a game (admitedly undeservedly) against them, to scraping through against the might of Samoa, and flattering to deceive against Argentina and then getting stuffed by the aussies? I think Wales have forgotten how to play, and need a cutting edge in the backs. When it boils down to it Wales have a world class first choice XV but very little strength in depth.

Not optimistic about the six nations.

Ireland: should have been well beaten by the Aussies, should have lost to RSA but a draw and a win says it all. Great sides are lucky and I think the Irish could be peaking for the world cup in 2011 nicely. Declan Kidney is going to be a great coahc, and comes across as a nice man. Good luck to them.

Scotland: dont see the rebirth msyelf. Very, very lucky against the Aussies who were appalling that day (if they'd played like that against Wales they would have got hammered) and showed their true class by loosing to a weak Argentina side. Robinson will do a good job but the side is still one dimensional and will struggle.

Italy: nice to see them win (eventually) against Samoa and performed well against the New Zealand 2nd XV. But it was the 2nd XV.............are still going to struggle against the top 10 and without Prarisse (best looking girlfriend in international rugby?) may find it even harder, but Mallet is a world class coach so be prepared for the odd upset.

England: now, far be it for me to stick up for the Public School boys but for f*cks sake they had 20+ squad members out injured! Johnson's selection is still weird but I think there is a good side in the making.

France: well, they are France! One minute world beaters and the next they get hammerd (the score flattered them by all accounts) 12-39 by New Zealand. Typical France. Like my old club you are nebver sure who is going to turn up, and are capable of loosing to anyone on their day.........

Umm............highlight of the year (besides Labour climbing the polls again) was Brown's riposte (courtesy of Alistair Campbell by all accounts ) to Cameron during the Queens speech debate. Basically the Tories want to do away with inheritance tax in £1million estates. Brown pointed out that this must be the only tax reform proposed in history where the proposer of the change knows personally all the people who will benefit from it.........

Tories are still dodgy economically, some good social reforms but god help us if they get back in power as I get the feeling they are just out of their depth. They have also managed to alientate every centre / right party in Europe with their shenanigans and Camerons back track over the euro treaty referendum means they have exposed themselves to attack from the UK Indepdence party. Mr Teflon is loosing his touch methinks.

In many ways I hope for a hung Parliament as I beleive we should have a fairer electoral system based on teh single transferable vote in multi-member constituencies, and the Liberals seem to be the only people who have got to grips with the economic probloems facing UK PLC. Or, if you are a Neo-Con Airbase 1................

Yankland still depresses. The general tactics of the Republican right seems to jsut throw mud (lies in other words) and hope some of it sticks. The bollox told about the NHS still p*sses off immensely. I dont know how Obama handles it all - no wonder he still hasnt managed to give up smoking.

On a final note, and this is meant to inform rather than scare, apparently 75% of Republican voters dont believe Obama is president (these are the same ones who dont believe in evolution, believe in the tooth fairy and John Wayne was a real action hero) as he was either inelligible to stand (not a yank) or that the vote was rigged. The other scary stuff I found out was Reagan (who basically destroyed teh US economy and left it to Bush senior to sort out) is now seen as some quasi liberal.............thats how far to the right the republicans have gone.

Add to all this that your average Republican voter doesnt believe in climate change, same sex marriage, or global warming (let alone that its been caused by man) and we are basically f*cked if these nutters ever get back into power. Sarah Palin for El Prez anyone?
Posted by RTB at 08:13 3 comments: